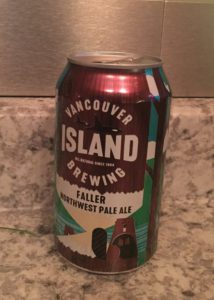 This is one of my favorite beers. They describe it as “This beer celebrates all those who’ve worked hard to make the island what it is today.

Inspired by classic northwest pale ales, it builds a history of its own with aromas of fresh pine and grapefruit, and a hearty malt finish.”

A smooth beer and you can taste just a hint of the refreshing citrus flavor along with the pine.

A very nice combination. The hops are not overwhelming which is nice. IBU’s are 35 so the bitterness is not too strong . Alcohol is 5.4% so you can enjoy a few and still walk the dog.

If you have always drank big box beer and want to dabble in the craft beers this is a good beer to start with.

Who is Vancouver Island Brewing Co?

Hermann Hoerterer brewed the first batch of Hermannator in 1987, it was the first specialty beer to be packaged in Victoria in decades. During all this time Vancouver Island Brewing has only had two brewmasters. Hermann and Ralf Pittroff who joined the company in 2001.

Vancouver Island’s Faller Northwest Pale Ale is a favorite among the Beer 30 Group.