BC Bud and Beer Interesting Facts 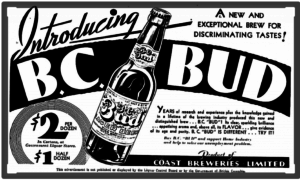 When us four beer drinking neighbors starting talking about this website, we had no idea that there was in fact a beer at one time that was called BC Bud.

I found this to be quite interesting so started to do a bit of research on it.

The company was called Coast Breweries Limited and was based in Vancouver, BC. They started selling BC Bud Beer in 1931 and in 1933 they bought into a brewery in San Francisco at which time they started brewing what we all know as Lucky Lager. This beer is still selling today.


Back in 1931 when Coast Breweries Limited was making BC Bud Beer it became known as BC Bud and was trademarked as such. Coast Breweries promoted their beer with this slogan “Buy BC Bud and support home industry, and help solve our unemployment problems”

I think that same slogan may be used today with the new BC Bud that has been legalized.

History of Beer in Canada

The European settlers introduced beer to Canada in the seventeenth century and the first brewery opened in Quebec City in 1668. This brewery was called La Brasseries due Roy and was started by Jean Talon.


Breweries became abundant in Canada supplying many taverns. According to the 1851 Census there were 1999 taverns in Upper Canada alone.

This seemed to become a problem as fighting, drunkenness, domestic abuse and household poverty became rampant. This is what started organized crusades against these establishments and from 1900 to 1914 one province after another dried up, 75% of the Canadian breweries were closed between 1878 and 1928. However most prohibition was repealed in the 1920s except for Prince Edward Island where it was not repealed until 1948.

The beer industry has been on the rise in the last few years, with a very fast growing segment being Craft brewing. According to Wikipedia one expert has said “the craft industry is attracting new consumers from different segments who would normally drink different things” Women and young men that normally would not drink beer are testing out the local craft breweries.

I guess that would explain why some major Canadian Breweries are buying up small local breweries. With beer sales being sluggish with a growth of revenue as low as 1.3% between 2011 and 2016. In 2015 there were only 30 large breweries and yet between 2010 and 2015 the number of licensed breweries increased from 310 to 640. That tells us many of these are small micro breweries and the big companies are trying to tap in on this.

25 BC Breweries were listed out of the top 100 in Canada in 2012, we will let you know which ones are on the top of the lists and test some of them out ourselves and let you know what we think.

This entry was posted in Beer Facts and tagged bc breweries, bc bud and beer, beer industry, craft beer. Bookmark the permalink.