Here is a video of a real live Canadian Wobbly Pop. This one happens to be a Coors and there is a story that goes along with it.

After a beer 30 night everyone had gone to sleep and at some point throughout the night a big wind came up…..the guests in the basement heard something and got up to see things flying off the deck. 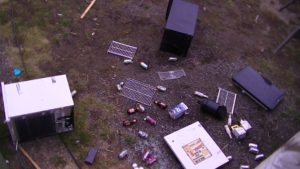 They awakened the home-owners who figured “heh” not much I can do about it tonight and went back to sleep.

In the morning what they woke up the learned that the two beer fridges that were once on the deck were now on the ground busted up and surrounded by injured beer bottles and cans.

That wind storm was so strong that it tossed two small fridges over the deck and onto the ground below.

This entry was posted in Beer Facts. Bookmark the permalink.