Reviewing a Meal as well as Beer tonight 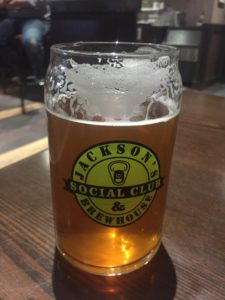 Last night a friend of mine and I went out for dinner to a local establishment called RB Cafe and Pub.

This Cafe and Pub is located in Lac la Hache, BC on Hwy 97.

I must say that the food was fantastic.

I would highly recommend checking out this local establishment.

At RB Cafe and Pub they carry a local beer on tap from Jackson’s Social Club and Brew House in 100 Mile House, BC.  The beer 30 club has been wanting to try this beer.

The owner of the Cafe told me that the Blonde was the most popular among his patrons so I had to try it.

I found this beer to be stronger than i thought it would be with a more bitter taste than I would have liked, but I’d like to go to the brewery and sample some different ones.

I tried to access the website for Jackson’s Social Club and Brew House http://www.jacksonssocialclub.com/ to see what the list of available beers are but the website is no longer available it just comes up with a bunch of Chinese symbols.


Last week I thought I would venture into town and buy a few beers to take to the next Beer 30 Club Meeting, but unfortunately the establishment was closed. This was a Wednesday at noon.

The Facebook Page says there are closed permanently which I know is not the case. Clearly they need to take care of the website and social media.

The reviews on the Facebook Page and Trip Advisor seem to be good for this brewery, there are not many yet, but it seems that would be a good indication.  It’s nice to see a brewery in 100 Mile House.

After searching the internet for a while trying to find more information on this local microbrewery I was able to locate varieties on Untappd.com this is an excellent site. You will need to create an account and sign up, but it’s a great site to locate breweries where ever you are.

I guess the next time we drive to 100 Mile House we will have to see if Jackson’s is open. I found several sites with the website link and different hours of operation listed. We will find out the hours and hopefully find some beer to sample and let you know.

This entry was posted in Beer Reviews and tagged bc bud and beer, Beer 30 Club, craft beer, RB Cafe and Pub. Bookmark the permalink.